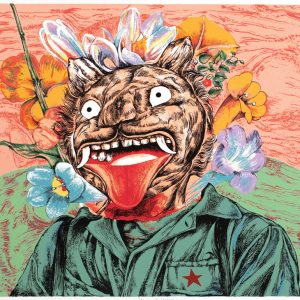 “Drawing from a personal lexicon of imagery that I’ve developed over the years, this piece is influenced by a variety of iconographies marked by personal, cultural, and historical experiences. Generally my work is influenced by Pre-Hispanic mythology and folklore aesthetics, as well as North American pop culture – specifically street art forms. The image is also a constant exploration of historical trauma and memory of violence through personal iconologies I revise over time.” – Osvaldo Ramirez Castillo