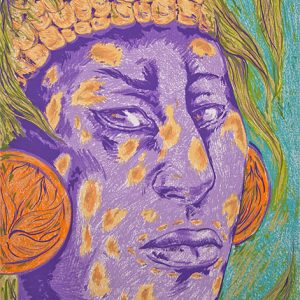 Esperanza Gama was born in Guadalajara, Jalisco, Mexico and graduated from the School of Fine Arts at the University of Guadalajara with a BFA in 1984. Four years later she moved to Paris and studied printmaking and drawing at the Ecole des Beaux Arts in Chaville, France. She cites her travels throughout Europe and Southeast Asia as major influences on her work.

As an immigrant living in an “adopted” country, Gama’s work expresses symbols that reflect her culture. Sol de la Noche Maya is her interpretation of the Maya Jaguar God. The image is inspired by the Mayan symbolism of good and evil, the duality of life, which was exemplified by Balam – the Jaguar God.