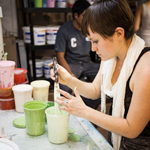 Personal expression seems to me to be the only way to relate to another human being in a world where we are constantly grasping for meaning. There are so many alterations that we perform on ourselves, either in our appearance or in the way that we choose to see something. These alterations, while they affect the way we relate to others that are also altering themselves with every decision they make, also help us understand ourselves and what our place is in this world. I believe that when we are able to understand certain aspects of ourselves, in return we are able to make more meaningful connections with other human beings. And the circle continues.

However, I had never truly understood how the alterations that I perform on myself affect the way other people understand themselves. That is until I made, what seemed to many to be, a bold move in my physical appearance. In September 2011, I decided to shave my head. My parents, of course, thought I was either severely depressed, or what seemed worse, rebelling against them and my Mexican roots. Yet, it had nothing to do with my cultural upbringing.

To me, shaving off my hair was a symbol of cleansing; it was a way for me to let go of unnecessary material things and introvert my energy to my physical and mental well-being. To the outside world, I was threatening the safety they found in their own beliefs. I realized that when you challenge something that a person believes to hold some sort of truth, the world becomes just that much more confusing for them. It’s as if I made the ground underneath the place where they stood disappear, and instead of free falling into a world of uncertainty, they find comfort in waving me off as simply being young and immature, and therefore “wrong” in the way I interpreted the world. I suppose that is the way most people begin to see the world with time.

Through my paintings, I began to explore and challenge the gender roles that I have been trained to believe to be true. The combination of imagery, language and color I use is suggestive of certain Mexican traditions that I’ve grown up with that were meant to reveal to me what it means to be feminine. Instead, these have always felt limiting to my exploration of self. My paintings have become a journal for my experience battling, altering and appropriating these traditions. The imagery of the naked and exposed bodies that I’ve been using is meant to reiterate my ideas on how susceptible we are to criticism from our peers. I believe that contemporary art should reveal the artist’s unique human experience as a means to connect with the person seeing the work of art. I’ve begun my practice by telling my own personal narrative. I draw inspiration from Art Nouveau painters and printmakers, modern Mexican printmakers, and post-modern feminist and realist painters in order to create a new kind of feminist pinup girl ready for a fight.

Through my proposed serigraph, Señorita Juice, I wish to experiment with the kind of imagery used in Art Nouveau and Jugendstil posters in which goddess like feminine figures were used to advertise things ranging from liquors to artist secessions in Germany and Vienna in the early 1900s, and also with the La Catrina imagery that Jose Guadalupe Posada used as a parody of upper-middle class Mexican values. By combining both of these imageries, I hope to produce a satirical image of a classy señorita who we can all look up to.