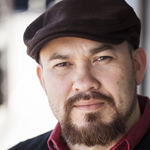 Born in 1973 in Tamaulipas, Rigoberto A. Gonzalez has lived his life on both sides of the Rio Grande. After earning a BFA from UT-Pan American in 1999 and an MFA from the New York Academy of Art in 2004, he returned to his hometown. Gonzalez remembered Tamaulipas as being peaceful, calm, even boring. Now he saw stories in the newspapers about beheadings and executions. The photos reminded him of those in Baroque paintings from the 17th century, such as the Beheading of St. John the Baptist and David with the Head of Goliath by Caravaggio, as well as similar works of art by Jusepe de Ribera.

Gonzalez is also inspired by the Mexican corrido, a popular narrative song or ballad, about the history, oppression, and daily lives of people, which emerged during the Mexican War of Independence and flourished during the Mexican Revolution. Corridos are now heard along the U.S.-Mexico border region, particularly in the variation known as the narcocorrido, which focuses on the lives of the people involved with the drug cartels. Read more in an article published in Latino Magazine in the Fall of 2012.

My current work consists of a representational tableaus that revisit the narrative paradigm. The salient naturalism of the tableaus is derivative and informed by the consciously formulaic artifice of Spanish, Neopolitan, Caravagist figuration. It is an attempt to appropriate the visual vernacular of a European culture and to draw a historical allusion. A theme running thru the paintings is the brutality associated with drug cartels in the border region between Mexico and the United states.

In my paintings I appropriate and connect the depiction of violence by Caravaggist, Neapolitan painters with the portrayal of violence in corridos. A corrido is a Mexican folk ballad in the past singers would document events in their communities or the lives of heroes from the Mexican revolution but recently they have focused on the lives of drug smugglers. Essentially a corrido tells a story, it is a narrative. There is usually a violent theme to a corrido; However, I am not interested in a journalistic version of violence. Corridos like Caravaggist paintings are not prose but verse.